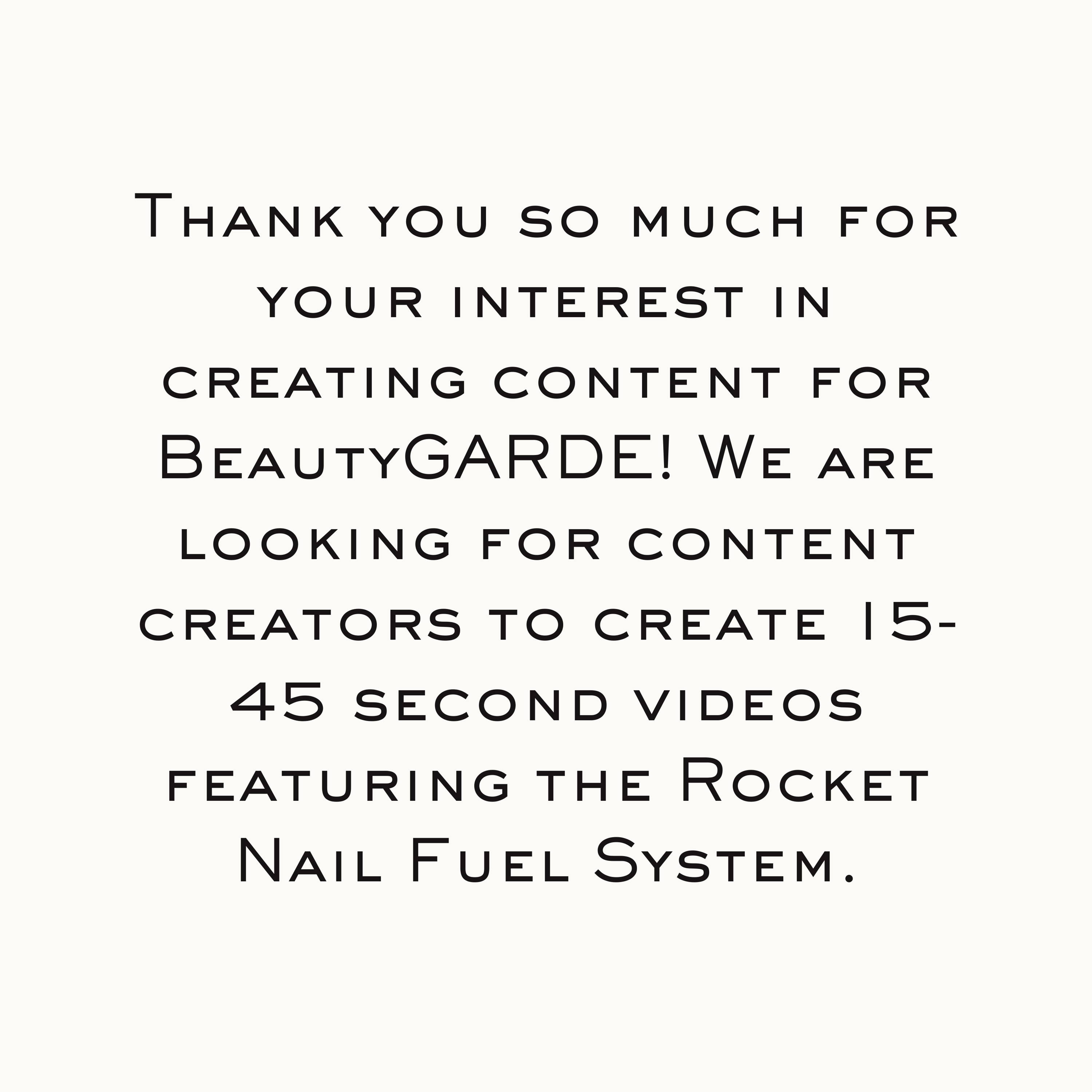 Rocket Nail Fuel is a seven-free, vegan, cruelty-free, made in USA, nail system which uses garlic and horsetail extract (plant-based) to repair, heal, and grow your natural nails.

It was designed to help repair damage from acrylic, gels, and dips but we also find it helps nail-biters, women with weakened nails from things like chemotherapy or aging, and anyone who wants to grow their natural nails!

There are (2) products - Rocket Nail Fuel TREATMENT is the clear polish - the base/top coat. Rocket Nail Fuel COLOR is the polish addition we created, as our Founder wanted something that was good for the nail to work in conjunction with the Rocket treatment.

1. Review this page & if you're interested in collaboration email community@beautygarde.com to finalize
2. Submit the content creation agreement below with your information
3. We ship your product
4. Film and send in your videos within 2 weeks of receiving the product
6. Share the photos & videos to community@beautygarde.com via either Google Drive or Dropbox
7. Get paid!

- Full tutorial (think 30 - 60 seconds) of a nail design using colors (design is completely up to you, however, we ask that it be a bit more complex than just a French tip and that you send to us for approval!)
- 3 - 5 images of your nails with said design
- No VoiceOver, however, we ask that you email us steps used.

- Use an iPhone or Android to record
- The video should be taken in bright lighting with a neutral background with no other items in the shot
- Share video via Google Drive or Dropbox to community@beautygarde.com

1. State the name, brand & purpose of the product ("This is Rocket Nail Fuel and it is a strengthener nail system designed to help heal & grow your natural nails")

2. Describe the personal benefits you received from this polish (ex. my nails used to be damaged and cracked! Now they are strong)

3. State your impression of the product and what you like about it

4. What advice would you give about using it? (ex. any tips or tricks you use to apply)

Video and photos will be used for BeautyGARDE's marketing efforts including (but not limited to): paid advertising campaigns, Instagram feed, email marketing, and website. We will not use your name on certain campaigns such as paid ads or email gifs, unless you provide us with a watermarked image.

Once you're ready, please email community@beautygarde.com with your selected option. Once we confirm & approve, you will complete the content creation agreement found at the bottom of this page.

Do you have another idea for collaboration other than what you're seeing above? We'd love to hear from you! Send us an email at community@beautygarde.com.